In contrast to popular hexapod systems, the DLR Robotic Motion Simulator (RMS) employs an industrial robot combined with a linear axis and therefore has a much larger, dynamically usable operational space, at comparatively lower costs. This improved operational space enables dynamic simulations of risky scenarios, such as dynamic driving manoeuvres near the limit of adhesion. For such scenarios, DLR has developed real-time trajectory planning algorithms in order to generate realistic movement dynamically and interactively. One application of the RMS is to research human-machine interfaces for ground vehicles and aircraft. To keep the RMS flexible for different applications, it has a modular setup that facilitates an uncomplicated exchange of instruments or the entire cabin and, in turn, quick switches between different simulation scenarios, such as control via steering wheel and pedals or control via joystick.

Whereas conventional HIL concepts with driving simulation in a motionless cabin are fully sufficient for investigating the functionality of the software and hardware, evaluating the new haptic HMI requires more effort. In addition to pure function tests, this involves researching the interplay between the driver behaviour and vehicle behaviour. This is realized by the combination of the subsystems shown below. This setup makes it possible to account for the disturbances acting on the HMI, induced by the force coupling through the driver. During the experiment, the driver sits in the cabin of the RMS and drives the ROboMObil interactively through a virtual landscape. In this complex HIL system, in addition to the visual feedback (virtual reality) via in-cabin projectors, the vehicle motion simulated by the RMS also acts on the driver. 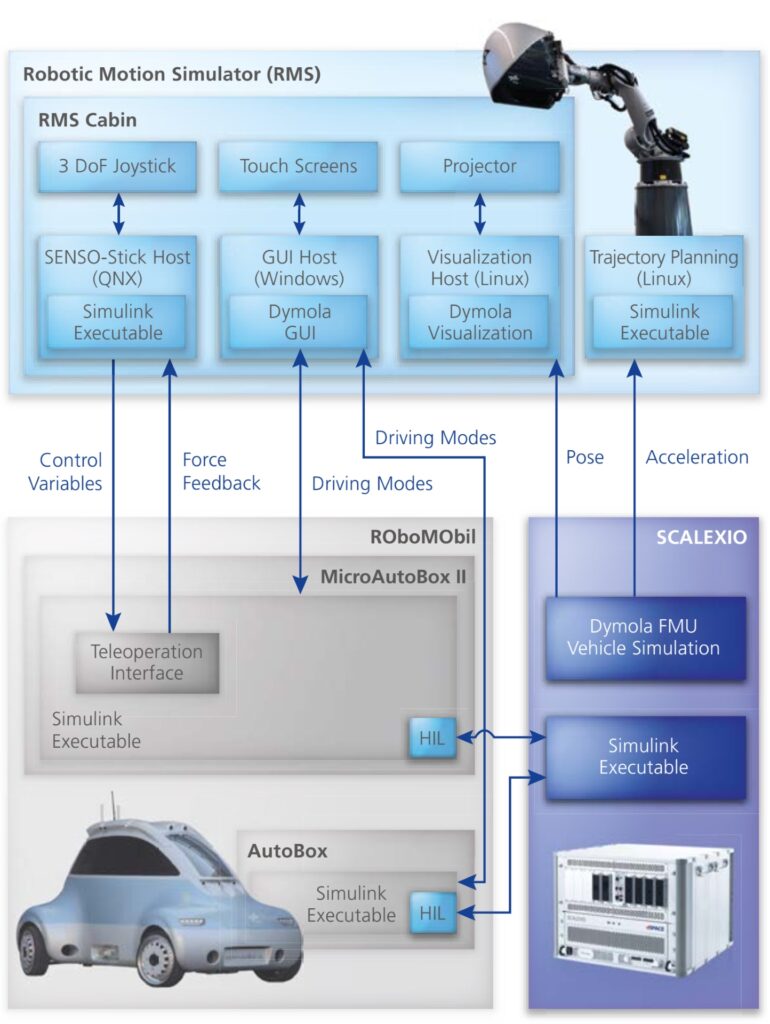